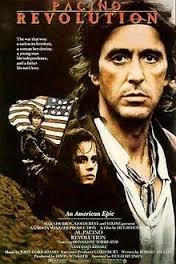 Where to start? Let’s start at the end. Why on earth would you cast Annie Lennox in a film and then have her voice dubbed when her character sings a song? In fact, everyone seemed to be dubbed or ADR-ed at some point, and accents wandered all over the Atlantic.

It’s well-known that this film was an almighty flop, and whether that was due to its rushed editing, poor script or odd casting, it certainly doesn’t hold up over time either.

What’s really sad is that at the very end there’s a technically great sequence where the camera follows Pacino for quite a while as he moves through crowds, an alleyway and across boats all in one take and I was so bored and willing it to be over that I almost missed it.

For whatever reason or combinations thereof this didn’t work, and it’s small wonder that Pacino hibernated for four years before returning to the screen.

Well, I didn’t get on with the first of these films, but I read many people saying this one was even better, so I had vaguely raised hopes.

But it looks like you have to have liked the first one to think that this one is better because I thought this was even more tedious. Sorry, but there it is.

I got sick and tired of cute, shoehorned musical cues and references to popular culture. And I was annoyed with the multitude of comic interjections just at the point when something serious was about to happen or had just happened. The opinion I expressed after the first film still stands:

It tries far too hard to be funny, to set up jokes. The funniest things in, for example, Thor or The Avengers Assemble emerge naturally from the characters’ reactions to various situations. They don’t need a punchline to be funny.

So many characters, mostly yelling at each other. And how many times did this end? (And I’m not talking about mid/end-credit scenes either.) Dead mothers (again). And someone like Gamora would never be interested in that pathetic Quill.

Everything Dave Bautista did was perfect, and I laughed every time he said something. And Baby Groot is cute, yes.

But this is too long, and too not my taste.

I admire this film somewhat, but after this rewatch I’ve decided I don’t like what it’s doing too much.

Perhaps I’m looking at it with 21st century eyes. But to cast so many non-Latinos as Cuban or Bolivian seems ridiculous. This gives rise to a second issue – accents. Sadly, Pacino is one of the worst culprits here. Many times I couldn’t actually understand what he was saying.

The timeline was strained – we see huge leaps forward in Tony’s wealth and position, yet I couldn’t work out how long it had taken him to get there, or sometimes even how he’d managed it.

Female characters? Only really two of note, Michelle Pfeiffer and Mary Elizabeth Mastrantonio, glamourous junkies both, with little agency. One meets a horrible end, the other just disappears from the narrative.

And unfortunately the Giorgio Moroder soundtrack dates it horribly.

So while it is iconic, it’s also a Brian de Palma film which should not be forgotten.

I wasn’t expecting to laugh as much as I did in this tale of grifters, oppression and eroticism.

Director Chan-wook Park has reframed this story from Victorian England to 1930s Japanese-occupied Korea, and it looks gorgeous. It’s clever in the way it uses flashbacks and replays scenes from different viewpoints, gradually letting the audience in on the twists and turns of the relationships and plot. For there are twists a-plenty.

I’ll be honest and say that the final third didn’t quite keep up the suspense, but by then I was with the characters and wanted to see how things played out for them. I didn’t feel like I had been sitting in the cinema for 2 and a half hours either.

Personally I didn’t need to see as much of the intimate scenes as we were shown – not through any sense of prudery or feeling uncomfortable, but because I felt it wasn’t required. The actors clearly yet delicately show us their feelings for each other, and once this has been established, the rest feels like a touch of unnecessary voyeurism.

A beautiful, sometimes over-the-top creation – would we expect anything less from Chan-wook Park?